Skip to content
Home > News > Thank you Phil! (and Sue, of course)

Phil Gowaty has been the MAKC’s vice chairman for almost as far back as we can remember. Known for his calm demeanor and his ability to get along with just about everyone, Phil decided to take a step back from board management and preserve management for a while.

Phil started caving in 1974 while in high school with his brother’s college outdoors club. Barton’s was his first cave and Bear was the second. Phil then became President of The Penn State McKeesport Outdoors Club 1977-78.

After moving from South Western Pennsylvania and the knowledge of a half dozen caves or so, he continued to visit these caves for the next decade and a half. Then one day while visiting Punxsutawney on Ground Hog Day, he met a group of cavers who let him know there is a much larger community of cavers than he had any idea existed.

Phil’s wife, Sue Moore, was an early MAKC treasurer who helped professionalize the role of MAKC treasurer in the conservancy’s early years. Sue graduated from Edinboro University of PA, majored in computer science. She started caving in 1976, on a first date with Phil to Barton’s Cave.

She is also a member of the National and Presque Isle Audubon Society, Western Pennsylvania Conservancy, Sierra Club plus other national and international environmental groups and participated in several Christmas Bird counts for the Presque Isle Chapter of Audubon.

Along with long-time secretary Carl Pierce, Phil has been one of the longest-serving officers and board members of MAKC.

Together with his wife Sue Moore, Phil and Sue are also known for their creative fundraising ideas. Especially well-known are ideas that have even been “borrowed” by others in later years, such as the MAKC “Bat Sticker” Beach Towels in yellow that had the bat sticker design on it. Yes, that design was copyrighted by its creator, Earl Biffle, and Sue and Phil traveled to a caving event in Missouri where they met Earl and got permission for it. Phil then came up with the idea of doing windshield sun visors that  had the same design on it. These fundraisers helped the MAKC in its early years.

At one point Sue and Phil gave then-Pennsylvania Governor Ed Rendell an MAKC t-shirt (not the rat’s ass one, mind you.)

In later years Phil and Sue designed the flashing bat decorations, the hillbilly wine glasses, the etched glass bat bookends, and helped bring to life many, many other fundraising ideas. They have also been stalwarts in the booth at the Old-Timers’ Reunion as well as at conventions and other regional caving events. Better boosters for our group than Sue and Phil would be hard to find.

And, as Phil noted, they actually ran into cavers at Groundhog Day in Punxsutawney. Kim and Tom Metzgar, Alex Boughamer, Heather Metzgar and others traveled to Punxy to experience Groundhog Day. Tom’s sister Heather was dressed in a woodrat costume she had created for another caving event, but they figured it was close enough to a groundhog that it would convince the early-morning revelers that it was a groundhog.  The others wore caving helmets and lights, back then carbide, and announced a search for “Phil’s Hole,” Phil being Punxsutawney Phil, and the hole being his groundhog hole.  Unexpectedly, being just north of Indiana County, a great coal mining region, everyone at Groundhog Day thought the cavers were coal miners. EXCEPT PHIL AND SUE! From that, a lasting friendship was borne.

Thank you both for your service, dear friends! 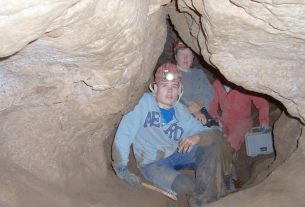 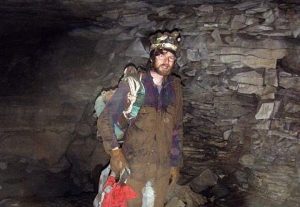 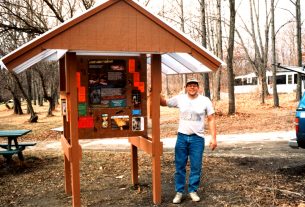