Finally, after 15 years of fruitless discussions and suggestions to implement some type of scientific study of the fluctuating water levels in Cleversburg Sink, Franklin County Grotto is now participating in just such a project.

Professor Tom Feeney from the Department of Geography and Earth Science at Shippensburg University contacted Jonathan Peterson a couple of months ago to determine if access to Cleversburg Sink was possible and described a project he and some of his grad students were involved in. He was checking water flow in several streams and ponds and wanted to include the cave’s extreme water levels fluctuations in the study.

Jonathan and I met up with Tom on Wednesday, May 13th, and re-familiarized him with the cave entrance and current water level. Tom had never seen the water quite this high before. It was still at about 10 feet above the top of the ladder, with only the tops of a few pieces of the large breakdown protruding through the top of the water.

We discussed placement of the sensor in the window on the entrance room wall and running the data cable up through the blue drain pipe to the upper side of the old concrete gate. This would allow for the periodic collection of data without going down into the entrance room, and also ensure the end of the cable remains high and dry, even if the water rises to extremely high levels that completely flood the entrance room. Jonathan said he has seen the water all the way up to the bottom of the concrete gate.

At that time, he will be acquiring a new submersible water level sensor and data logger with a 75 foot or a 100 foot data cable. It will log depth, temperature, time and chemical properties of the water at preselected time intervals, ranging from seconds, to minutes to hours or days.

Tom also mentioned that his students had been doing a surface survey of streams and ponds in the area and that it had stopped at the Cleversburg gate. One of our tasks would be to survey from the inside of the cave where the sensor would be located, up to the gate and tie that into the surface survey.

In the mean time, the Franklin County Grotto had agreed to install a few hangers in the cave so the data cable that would support the water level sensor could be held out of the water and out of the way of any cavers going through the entrance room. Howard White, Jonathan Peterson and Ken Tayman all got together on June 24th and prepared to install the hangers.

We decided to check the level before hauling in the tool boxes with the drills and batteries.

We were in luck. The water was actually down two feet from May (27 feet) and we would be able to “rock hop” over to the “window” and the ledge on the wall. We exited and picked up the gear and re-entered.

It didn’t take very long for Jonathan to drill a few holes and drive in the hangers. We placed two hangers. One in the top of the window about 23.8 feet above the floor of the passage at bottom of the ladder, and another about halfway between the window and the old concrete gate.

With this completed the other project FCG has to complete prior to placement of sensor is to survey from the surface gate down to the hanger in the window. We will try to coordinate this ASAP.

On July 19, 2009, Pat Minnick, Jonathan Peterson and Ken Tayman all showed up at the cave to survey from the surface gate down to the hanger in the window. This will tie into surface survey to other springs and streams in the area so they can all have a common reference to sea level when discussing water depths in the various water features.

A few of the shots were very steep angles and difficult to read. Back azimuths and back inclinations were essential in making sure we were getting accurate data. It took five shots to work our way down the corkscrew entrance, through the old concrete gate and to the hanger in the window.

The vertical drop from the gate to the top of the window calculates out to be 38.4 feet. Then another 23.8 feet down to the floor of the main passage below.

Now, we are waiting on Professor Feeney to obtain the sensor, and then we will help him place the equipment. So far all is going well!

Professor Feeney and I agreed to meet at the cave on Tuesday, September 15, 2009 at 10 a.m. The water was halfway down the ladder and was not an issue. Tom hung the sensor from the hanger in the “window” previously installed by Howard and Jon. I draped the cable along the wall, and we guided it up over the top of the old concrete gate. We realized we still had quite a bit of cable left, so we threaded it up vertically through cracks in the breakdown and tied it off near the ladder at the gate.

At 1 p.m. the sensor started taking measurements every 15 minutes. Well stop back in a few weeks to make sure it is working. 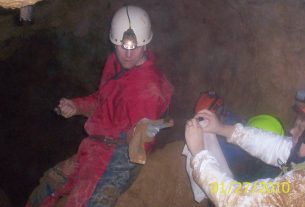 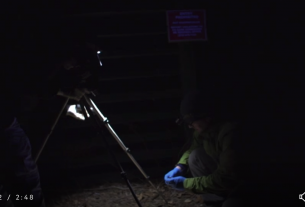