Rupert Cave is notable for its many speleothems, and for an interesting combination of cave passages that change character as one travels through the cave. Speleothems include a number of large ribbons, many of which have a twin, or second ribbon, right behind the first ribbon. The largest broomstick stalagmite in the cave is well over seven feet tall. Stalactites tend to be twisty, multi-fingered hangings that remind one of a claw. There is even a shield-like speleothem just prior to the Jewel Room. Crinoid fossils, brachiopods and corals can be found throughout the cave.

The historic section is a rectangular maze of joint-controlled passages formed primarily in the Keyser (limestone) Formation, of Silurian Age. Overlying this rock unit is the crinoidal New Creek (Coeymans) Limestone, a member of the Devonian age Old Port Formation, Helderburg Group. The principal cave passages here trend NE-SW, and are high canyons ending in sediment chokes. These passages are connected by smaller cross-joint passages at nearly right angles. The resulting maze pattern is uncommon in caves of the Valley and Ridge Physiographic Province. This section of the cave is 1,800 feet of relatively easy walking passage consisting of four parallel canyons. Bedding and joint plane anastomoses can be found in several places in the historic section along with an area of slickensides (smooth striations in the rock indicating slippage along a fracture). Halfway down the second canyon passage there is a flowstone sheet hanging above a travertine floor. Small, white dripstone nodules can be found in the floor just under the flowstone sheet. At the back of the historic section is a short climb up to the Four Guards, a group of four-foot-high stalagmites “guarding” the passage. The area just prior to the Four Guards contains rimstone dams and shallow pools. In one such area there are a cluster of cave pearls. The historic part of the cave has been heavily vandalized over the past 100-plus years. The cave has seen much lighter, controlled traffic during the last two decades and it is heartening to note the natural recovery of the cave in several areas.

Leaving the historic section of the cave requires maneuvering through the Keyhole; a series of tight, right angle turns and then a keyhole shaped fissure. Once through the Keyhole, the cave continues in a joint-controlled passage. The lowest part of the cave is at the base of South Hill. The entire cave has 60 feet of vertical relief, and most of that occurs at the climb up South Hill, a steep, dip- oriented clay-floored passage. The passageways throughout the new section of the cave are phreatic and the floor is dry, soft sediment.

Halfway up South Hill there is an intersecting passage. The left hand passage is an extremely tight 30-foot crawl that opens up into a canyon 75 feet long and 15 feet high. This canyon ends in a flowstone wall. The right-hand passage originally went 100 feet before becoming impassable due to a large rock in the narrow passage. The offending rock was moved in the summer of 1998 and the passage now continues on to Manganese Flats. A vein of large crinoid fossils can be found in this passage along with a grapefruit size coral in the ceiling. At the top of South Hill the passage leading further into the cave is a 210-foot crawl with a small room halfway through. Within this room is one of the newest columns in the cave. A photograph from 1993 shows a stalagmite and a stalactite with about three-quarters of an inch of separation. In 2010 it was discovered that the two had joined. The crawlway eventually opens up onto Manganese Flats, an area with a pristine maganese oxide floor. The passage leading from Manganese Flats to the next room contains a unique speleogenetic/speleothemic feature. There is a small circular chamber with a thick, layered travertine deposit forming a false floor near the present ceiling level. The false floor has been broken out by some undefined natural process. The mechanism is unclear as some of the broken pieces lie above the original level. The travertine layer continues along the passage, and intersects the original bedrock ceiling. One such travertine area resembles a large beehive coming out of the wall, and is so named.

One of the largest rooms in the cave, the Basin Room, is encountered next, and parallels the Ships Prow Room. These two rooms are separated by a rock wall with several crossover passages. The Badlands is a large area of crystallized rimstone dams. The water level within the dams can vary greatly throughout the year and does not seem related to rainfall on the surface. A large rock outcropping protrudes over Shark Tooth Lake. This overhang has a row of white stalactites circling the perimeter of the rock and their reflection in the water gives the appearance of a menacing shark’s jaw.

Speleothems resembling lily pads are found in the passage between Shark Tooth Lake and the crawl leading to the Hall of Giants. It is obvious that at some time the water level was at a constant height long enough to leave calcite deposits around the base of large columns, hence the name Lily Pad Alley. The next section of the cave consists of tight, damp crawlways interspersed with several areas of unique crystal speleothems, including a pool with two- to three-inch-high calcite crystal bushes.
The Hall of Giants follows; an extremely beautiful area of broomstick stalagmites with heights varying from three feet tall up to six feet tall. At the far end of this room is an area of rimstone dams with a six-inch tall speleothem near the dam edge. A half circle of calcite deposits is found around the stalagmite base. At the bottom of the dams there is a pool containing calcite raft stacks and an incipient raft cone, which are rare in caves of the eastern U.S. They form by calcite rafts sinking on top of each other, with a center hole forming from dripping soda straws.

A large rimstone dam aptly named Hoover Dam contains Lake Mead. On rare occasions the water overflows the dam and drains into a hole in the floor. The drain in the floor has not been explored. Brachiopod fossils are found in the walls leading into the Pueblo Room. Veins of iron oxide seem to ooze out of the limestone in this passage.

A solid wall of stalagmites and stalactites gave the Pueblo Room its name; the entire wall resembles Native American cliff dwellings. The crawlway from this room to the Jewel Room is an area of crystal flowstone resembling fish hanging in a market. A very large hanging drapery protects the entrance into the Jewel Room. Pristine flowstone speleothems and rimstone dams are abundant in the Jewel Room, which literally sparkles with crystals.

The Jewel Room was thought to be the final room in the cave until Todd Hancock, Tim Long and Steve Rhodes dug open a tight dirt-filled crawl and extended the cave by 900 feet in the mid 1990s. Past the Jewel Room the nature of the cave changes tremendously. There are fewer speleothems and the floor is sticky mud. There is one large room, the Camp Room, with several drops leading to short passages. The Cascades from Heaven, the largest speleothem in this area, is an impressive wall of white, crystallized flowstone. The cave ends in a 35-foot pit without any leads.

The entire cave is developed on the margin of a small syncline. The historic section of the cave is at the nose of the syncline, with dip directions varying from south to west, at magnitudes of nine to 32 degrees. The new section of the cave is developed generally along strike, on the eastern limb of the syncline. Dips increase from the front of the new section to the back, beginning at 15 degrees (NW) in Manganese Flats, and culminating at 72 degrees (NW) near the end of the cave (Camp Room). The cave is relatively dry in this phase of its existence. Water seen is mainly from ceiling and speleothem drips. In the extreme back of the cave there is intermittent water present in a small stream. Based upon topography, and the presence of a series of springs at the northeast end of the ridge, Rupert Cave formed as a drain for groundwater flowing northeast from Bald Ridge. These waters came to the surface in springs along the unnamed tributary to Spring Run, much as present-day springs in this area do. Detailed surface mapping has not been conducted, but it is possible that thin clastic rocks exist on Bald Ridge, allowing sinking-stream recharge to the cave. Excluding this option, recharge to the cave would be through sinkholes and diffuse infiltration of rainwater. 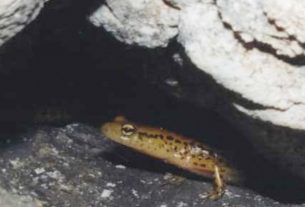 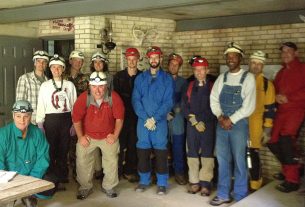