There is an old commercial about ketchup where the catch phrase is “anticipation” and shows the red tomato sauce oozing slowly out of the container onto that juicy hamburger. This is kind of how cavers feel about Cleversburg Sink as its access is based on an anticipated lowering of the water level in the cave to the point where all areas of the cave eventually become passable. Water from Burd Run, a surface stream, directly enters the cave system and the reason why the cave is often flooded with over 25 feet of water in many parts of the cave. Sometimes the cave is flooded for years, as it was between 2008 and 2015, and it is only when that lucky combination of rain events or lack thereof allows enough time for the water to drain from the cave. Last year, the cave opened up in late October and remained open for about a month before flooding again. This year is proving unusual in that the water level drained out in September which is earlier than normal and has continued to drain and dry out deep pools that usually hold water even when the cave is open. As a result, the trips to Cleversburg have been fast and furious and for a variety of reasons including the typical sport trips but also for digging and exploring sections of the cave not normally visited.

And while I have now been on 5 trips this season, I’m not even close to Mike Shank, a York Grotto member, who has been on at least a dozen trips this year. Woohoo!!

My first trip was with Janet and Mark, from Front Royal Grotto, and this was a good getting reacquainted trip to learn the passages again. I forgot how steep the entrance is and requires a series of climb downs made easier with pre-rigged ropes. The striking thing was seeing the unique banding and colors of the limestone throughout the cave and also feeling the anticipation of traveling through the center crawl section wondering if it was really that tight and tiring or not?? Well, turns out it is a fun crawl section, not overly tight, but it is a work out if you go all the way to the back of the cave. Formations and flowstone are sprinkled through the cave, especially in the back sections and it’s always fun to move along looking out for that next alcove or area that is decorated with neat stuff.

The next trip was spent with Mike Shank, Gordy Ley, from Franklin County Grotto, and a couple of others on what was proposed as a photo trip. What was nice about this trip was we were able to see some of the fissure sections of the cave as well and it was a leisurely paced trip with of course much time spent taking pictures, looking at maps, and poking in various side passages not normally hit on many trips. We ended up being underground about 8 hours which was surprising as the time just flew by.

Another trip was a Front Royal Grotto trip with usual cast of characters including Nuch, Aim, Colin, Janet, Rob and Alexa. Good time was had doing both crawls to the back and fissure passages. It was interesting that any standing water in the low passages was now all gone making access even better than normal. We even went down the tunnel passage heading towards the new section but it ended up being another crawl and by the time the trip ended after 4 hours, we were all feeling it but in a good way. Aim, a newbie caver, really seemed to be a natural and looked comfortable managing all the various moves required on this trip.

Well, we are not sure how much longer the cave will stay open but if things hold, I’m sure I’ll be itching to get back one more time.

Cleversburg just seems to be a cave that keeps on giving. Maybe some of you will have an interest to come back again as well and in the meantime, I think I’ll go get a big juicy cheeseburger topped with some of Heinz 57 best! Yum! 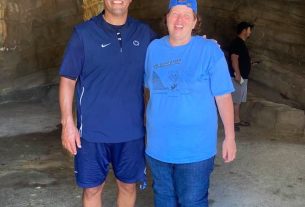 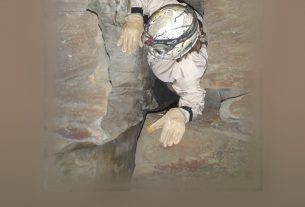 Common Caver Courtesy: Or the Impression We Leave With Flashlight Cavers 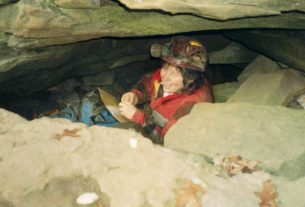