The exact date of the discovery of Rupert Cave is not known. In the 1843 Historical Collections of the State of Pennsylvania, by Sherman Day, there is a reference to Henawalt’s (sp) Cave, near McVeytown; a cave of “vast dimensions, abounding with calcareous concretions: crude saltpeter has been taken from it at times.” Hanawalt (sp) is a very common name in the area and can be found etched on the walls of the cave throughout the historical section. Henry Hanawalt did own adjoining property at one time. Whether this reference to Henawalt Cave is actually Rupert Cave is unknown.

People have been going in the cave for over 140 years as evidenced by the numerous names and dates etched in the walls. The oldest date found in the cave is 1873 and was found with the signature of Greg Lloyd Rupert, some 15 years before he would become the first Rupert to own the property. On August 30, 1897 a group of four females from Michigan were in the cave and marked their names on the walls. Many local names; Rupert, Hanawalt, Dunmire, Hartley and Rhodes, with dates from the late 1800s and early 1900s, and even bible scripture, can be found in the cave. Interestingly enough, if you walk through the Spring Run Cemetery, about two miles from Rupert Cave, these same names can be found on the tombstones.

The title of the land can be traced back to 1785 when an original warrant was granted to Alexander McDonald. In 1791 George Galbraith purchased 305 acres from McDonald for 600 pounds; the 305 acres included the land with the cave entrance. The Galbraith house, built in 1785, still stands on Furnace Road just outside McVeytown. Retta Galbraith Clark inherited the 305 acres from her father. Retta Clark and her husband moved to Pittsburgh and in doing so sold several pieces of the 305 acres including selling 120 acres (that included the cave entrance) to Jane Gracey. This transaction took place at a sheriff’s sale in 1872; Jane Gracey was the highest bidder and bought the 120 acres for $950. In 1888 the administrator of Jane Gracey’s estate sold the land to Lloyd Rupert for $800. Fern Rupert, one of Lloyd’s sons, and his wife Anna purchased 20 acres of this land in 1923. The 20 acres contained the cave entrance. Ellis and Marie Gill purchased the 20 acres from Fern Rupert in 1967 and in 1971 purchased another six acres from George and Anna Hartley; this land contains the quarry found on the property. After Ellis Gill died in 1984, his widow sold the property to Ron and Sally Boaz and David and Ruthann Schooley. In 1996 the current owners, George and Karen Bange, purchased 28 acres from the Boaz and Schooley families. All total there have only been eight landowners and no permanent living structure has ever been built on the land. In 2000 George and Karen added 11.5 acres to the property so that it would include all of the land directly over the known cave.

The first “official” reference to Rupert Cave appears in Ralph Stone’s 1932 edition of Pennsylvania Caves (see map on previous page). At that time the cave entrance was an “inconspicuous hole four feet in diameter in a gently sloping pasture.” A more detailed description of the cave and cave map, by Medford Smith, Marlin Kauffman and Bernard Smeltzer, appeared in the 1953 NSS Bulletin 15 (see map above). The total length of passage was recorded as “about 1500 feet.”

As organized caving grew in popularity, Rupert Cave was a favorite cave for many; it was close and an easy cave. Trip reports to the cave date back to 1960. An article appeared in the York Grotto Newsletter, August 14, 1960; “a quick trip to Rupert was made. Much time was spent in trying to locate this cave but finally it was located. This is an easy cave and a very fast trip through it was made.” Even “non-organized cavers” visited the cave as evidenced by an article in the Caterpillar News and Views, June-July 1959 in which Palmer Tome, a Caterpillar employee, took fellow workers into the cave. Pictures in the article show the original entrance and the boards covering the entrance; these boards were used to keep animals from falling in the entrance. The spelunkers can be seen with lanterns, alcohol headlamps and caps to protect their heads.
When talking to people who grew up in the area, Rupert Cave was known as a popular place for church picnics and service group gatherings. Locals remember Fern Rupert hosting wiener roasts on the property followed by a trip into the cave. At this time the entrance was still a vertical opening in the middle of a sheep pasture and you used a “rickety old ladder” to descend into the cave. During the time that Ellis Gill owned the property he frequently allowed the Lewistown Fire School to practice rescues in the cave. The lighting for many trips was lanterns, although in later years people used flashlights. It was common practice then to take formations from the cave for a souvenir, as confirmed by the abundant damage in the historical section of the cave.

Accounts of the buildings on the property are varied; for all intents and purposes it seems that in 1971 Ellis Gill wanted to make the property into a campground with the cave as an attraction. He built the bathhouse and planted many pine trees on the property. He also constructed a building over the cave entrance which, upon close inspection, seemed to have two doors to the outside for allowing groups to enter and leave the cave in an orderly manner. The interior of the building had windows to view the cave and the staircase leading into the cave. There is no account of the cave, or property, ever being open for business.
In the fall of 1986 the future of the cave changed drastically. Jim Kennedy was in the cave on a Nittany Grotto trip. Jim was leaning against a rock wall waiting for the group to finish exploring a cave passage, and he felt air moving behind him. The rock wall had a long vertical crack in it. Jim started looking closely at the crack and decided to explore it further. From Jim’s account it took three trips for Jim and two other Nittany Grotto members, Kirk Taylor and Brian Wendler, to dig through the crack, past the Keyhole and into the new section of Rupert Cave.

With the discovery of the new section, landowner relations changed. York Grotto members surveyed and mapped a large portion of the new section in 1988. Various grottos and individuals approached Mr. Boaz about purchasing the cave. With the discovery of the new section, Mr. Boaz felt he could inflate the purchasing price. For the next seven years the cave was basically closed. During this time the cave building was vandalized and the cave broken into numerous times. Fortunately there was little harm done to the new section of the cave. Mr. Boaz did allow a local newspaper reporter into the cave in the spring of 1990. The story ran in the Lewistown Sentinel on July 5, 1990 in the outdoor section and was titled Under the Surface. Although the brief write up is amusing in its inaccuracy, the pictures in the article are quite nice.
George and Karen Bange purchased Rupert Cave from Ron Boaz May 3, 1996. After purchasing the cave, projects on the property included repairing and opening up the cave building, gating the cave and cleaning up the quarry. Many people helped with these projects and after two years of work the property was clean and the cave protected. At the spring MAR meet in 1996 the MAR presented the Banges with a cave protection sign which is hanging in the entrance passage of the cave. George Bange, with the help of various individuals, finished the cave map in the fall of 1998. In all it took 17 survey trips over 10 years, 1988 to 1998, to finish the survey.

The most recent discovery in Rupert Cave occurred during the spring of 2001. Two of the local Boy Scout troops came to visit the historical section of the cave. With over 30 scouts and adults exploring the cave George went to an out-of-the-way spot and started to dig. After about four hours of digging a trench through the soft sediment floor the Earth Room was discovered. The newest room in the cave was only 250 feet from the entrance. Although it is not a particularly large room it does contain all of the formations and floor of a virgin room. Having such a room in the historical section of the cave is an excellent opportunity to show beginners the contrast between a near virgin passage and passages that have been used and abused for 140 years. With this most recent addition the total passage length now stands at 7,043 feet.
Dale Ibberson videotaped a trip through the cave in 1997. On July 2, 2000, with the help of Brian Pease, a low frequency radio beacon was taken into the cave and used to locate two survey stations on the surface. Subsequent surface surveys indicate that the plan view errors were less then 0.5%, proving that random errors really do cancel out. 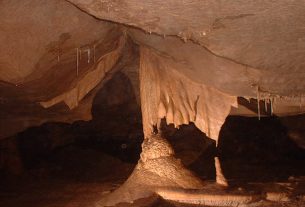 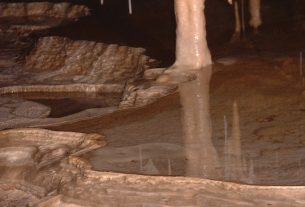