I was unable to go the Fall MAR Meet, held this year at the beautiful Rupert Cave Preserve in Mifflin County. However, Tom was able to go and represent MAKC at the event. As with any caving event for which I am not able to attend, I eagerly awaited his return so I could hear about old friends he had seen, new friends he had met, and any caving adventures he had undertaken.

I never did find out much from his excited ramblings about a West Virginia cave that was for sale. MAKC had been looking for a cave to purchase for a while now, especially since we had been left an endowment from the estate of a long-time member. Tom reported back that Silers Cave near Hedgesville, in the eastern part of the state was for sale. The cave had been closed a number of years ago due to over-visitation, and the entrance actually covered over.

What little I knew about it I knew from friends. It was a maze cave similar to the nearby Cricket Maze Cave, and it was one of the few caves of any length in that region. It was close to NSS grottos from a variety of areas and it would be a good acquisition for us. I got a little excited.

Jeff Jahn, a board member from Virginia, offered to go look at the cave and quickly made arrangements to visit. He showed up with a realtor at the same time an eastern Pennsylvania caver showed up with a realtor, also wanting to look at the property, within a few days of us hearing the parcel was for sale. The realtors, generally thinking buyers would be in competition with one another, were somewhat shocked when Jeff and the caver agreed to tour the property together.

Jeff sent back detailed notes and photos and the board prepared to act quickly on this. I had received some emails from people letting me know the cave was for sale as well, and I responded as best as I could. Jeff then reported that the other caver, whom he had maintained contact with, was going to make an offer. So we waited.

We didn’t mind one bit if a caver wanted to purchase Silers Cave. It was equally as good as if we had purchased it ourselves.

Two days after Jeff’s site visit with the Pennsylvania caver, and before the caver had a chance to make his offer, we had a bit of a stunner—the cave had been sold! Rumor had it that it was a caver, but no one knew who it was.

Wow, I had heard interest was high, but this had moved very, very quickly. The following day, a Saturday, I received another email about the cave from an email address I did not recognize. I responded back that I had heard the cave had been sold, and I had heard it had been sold to a caver.

A while later I had another email from the same person, who informed me that she was the buyer. It was thrlling! I emailed back my heartfelt congratulations, and noted that if there was anything she needed, advice from a cave owner, or cave management ideas, all she had to do was ask. She knew Jeff, and knew Jeff had been looking at the cave for us, and I suggested if she needed any help he would be closeby.

Sometime shortly after the purchase, the new owner and I did touch base by phone. I felt like I talked for a mile a minute, and I’m sure I did, trying to be as helpful as I could as far as information. Even though she was a caver, I figured, it still had to be a bit overwhelming.

While she had made an offer on the cave, there was one thing remaining, in her mind, before the closing, and that was to make sure the buried cave entrance was actually on the parcel.

Jeff eagerly volunteered to go, and he went, with new owners and Jim McConkey, who used to manage Silers Cave for Sligo Grotto back when it was open. Victoria is a member of Baltimore Grotto, which has been a longstanding supporter of MAKC.

Jeff reported back and sent some photos. At this stage he was sending them only to me, as very few people knew Victoria and Charlie had made an offer on the cave. I wasn’t going to be the one to spoil their news. As I told her on the phone, “It’s your party!”

The cave was indeed on the parcel, and the new owners did indeed close on the property. Then what to do?

She kept in touch with Jeff and before long a management plan was proposed, as was a lease by MAKC. Jim agreed to manage the cave once again, in a way very similar to the way it was before. The only difference is that there will be a little more scrutiny involved as to who is making trip requests, the experience of the leaders, and there is now a written management policy. Victoria hopes to begin to allow visitation by cavers as early as spring.

The lease of Silers Cave was approved at the MAKC’s November meeting. The draft of the management plan was approved as well. Jeff informed us that there may be some additional tweaks, so keep an eye on the website for any additional changes, as it may be a few months before we can communicate in print. The owners and managers will get all the emails sent to silerscave@karst.org, which is the email for trip requests. We will be looking for volunteers to assist with various projects on the property and potentially, as things go along, some people who may volunteer to lead trips to the cave.

If you see Victoria and Charlie, offer your congratulations! If you see Jeff, offer your thanks! But most of all, if you can help in any way, volunteer! An organization such as MAKC is only as good as the volunteers. And if you see this and are not a member of MAKC, please join! While we are an all-volunteer group we have expenses to maintain the organization, some of which are quite involved. 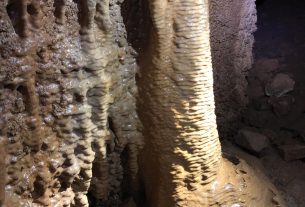 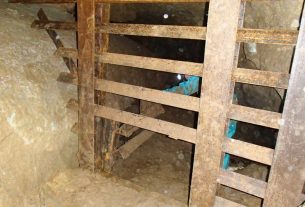 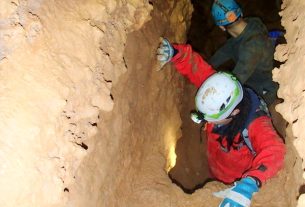