On November 27th, 2017 Kim Metzgar and I met with the sales and marketing director of Bedford Springs Hotel—Omni Resort; John Hess. During the meeting we were reminded how small of a world we live in. John used to work at Snowshoe Ski Resort in West Virginia and lived on Slatey Fork Farm….the same housing development that the MAKC Billy Clay Pit is located! By the conclusion of the meeting we all seemed to have a general understanding of how an agreement to lease would work.

After the meeting, Kim and I changed into caving clothes and met John and the hotel horticulturalist Lester Wallack at the Heritage Trail trailhead located near the entrance of the resort. Lester was driving a 5 person side-by-side four wheeler that was to be our ride to the cave entrance! We were asked if we thought this was the correct cave and we agreed that it looked like what we remembered.

Kim and I geared up as our host watched and took pictures and entered the cave. The entrance to the cave is an easy crawl that quickly opens to a passageway that you can stand up within. A few side crawlway leads are evident in this first passage on both sides but a quick look at the map indicated that they do not go far. Following the main passage further it quickly opens up to a pair of rooms. Within these initial rooms and passages we observed boards and sticks brought into the cave for some unknown purpose. In addition, it appeared that a few fires were burned inside. The garbage within the cave was minimal except for a blanket and a few small plastic items. A clean-up would not be too difficult to perform. Graffiti observed included only wall carvings that were modern in my opinion. We did not observe any spray paint.

Kim and I took many pictures of the rooms and formations we observed. Much of the formations are damaged or broken/removed. However white colored calcite deposits are evident indicating that active formation growth in some areas continues.

We exited the cave after approximately 40 minutes and then hiked a small area around the cave. There are many karst features to be observed and two small quarries. Initial evaluation of the geology indicates that this is formed in one of the lower members of the Old Port Formation such as the Corriganville Limestone or the New Creek Limestone. However, further investigation should be done to confirm. The resort site primarily upon karst forming limestone of the Old Port Formation and the Keyser/Tonoloway Formation making the entire property interesting to look for other caves.

We “checked out” with the hotel management prior to departing. 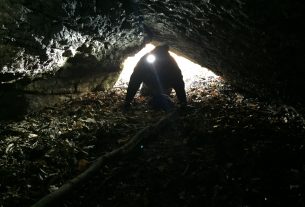 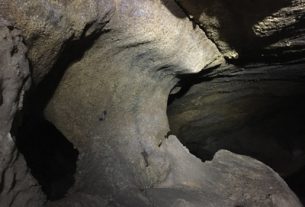