Skip to content
Home > News > Casparis Gated, But Not?

By Kim Metzgar
Tom Metgar and I and Finn recently went to Casparis Quarry to do some surface work prior to me finally completing the cave map. We connected one of the side cave passages via a surface survey and I was uncertain as to the connecting point inside. Something was wrong with the surface survey that required us to go back. Since the area is posted as a restricted area, I asked PGC biologist Greg Turner for permission and told him the date. He gave it, as I’m sure he is looking forward to seeing the map.
Tom had brought hedge clippers as he envisioned an overgrown trail with ticks climbing all over the brush. He was correct. So he clipped until we got close to the top of the quarry while I spent my time picking ticks off my jeans and off the dog. There was still a faint trail.
Tom climbed up onto the dam at the entrance to take a look at the gate and quickly pulled a lock box covering out of the stream. Then he pulled out the mangled remnants of the lock. Hmmm. Suppose some locals didn’t like the gate? The gate has two removable bars, though only one is necessary for people to fit inside. The second one, apparently, is for rescue purposes in the event a sked needs to exit or perhaps a sumo wrestler needs to enter.
The top bar had been carefully laid back in place apparently so the casual observer might not think anything was wrong.
I did send some of the photos Tom took to Turner. When cavers are involved with monitoring a cave, for whatever reason, at least there is someone to check on it on a fairly regular basis. Apparently the PGC has no such arrangement with anyone to monitor the cave. There was no telling how long the lock had been damaged and if the cave was being entered. Too bad there is not an arrangement for recreational access during non-critical bat hibernation times, such as the one that the MAKC has arranged with the Forbes State Forest. Were there an arrangement with the PGC, it is unlikely that it would have prevented damage to the gate or lock. But it is likely that someone would have noticed in a timely fashion.
In any case, Tom, Finn and I were able to complete our surface survey, the third time I had undertaken such work. Now there are no excuses for not finishing the map.
So, hopefully you will be viewing the Casparis map in these pages in a newsletter sometime soon. Too bad the cave is closed. 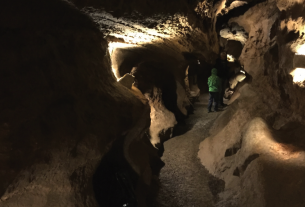 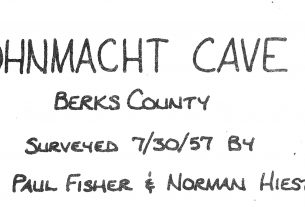 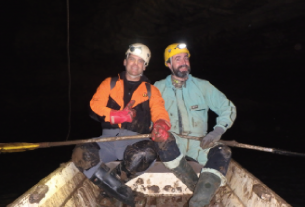