In August of 2014, a number of MAKC members, board members and volunteers took part in a project to re-do the parking lot at the Billy Clay Pit Preserve, one of our owned preserves, in Pocahontas County, West Virginia. Board member Dave Field is part owner of a farmhouse less than an hour away, and several of us stayed there the night before, including Dave, Mike Kern, and Carl Pierce. Other volunteers met us at the cave parking area the next day, including Walt Hamm, Jon Hamm and Jeff Jahn.

We prepared the parking area prior to the stone truck’s arrival by spraying for weeds, and then laying down some landscaping material to prevent weeds from growing up through. We got most of the site preparation done prior to the truck’s arrival. When it did arrive and spread the stone, it was somewhat intimidating due to the amount and the number of volunteers. The last time we had done this, probably 15 years ago, there were three times as many helpers. But actually, with a wheelbarrow and a slow, steady stream of haulers, rakers, and spreaders, we got most of the job done in the morning, breaking for a later in the day lunch. We also picked up and stacked some brush and branches that had been covering the trail.

Several of us also cleared brush from the path between Billy Clay Pit and Clay Pit #2, which is also on our property. It is just a short FRO pit.

After the work weekend, several of the participants joined in popping into Billy Clay Pit, including Carl, Jon, Mike, and Walt. Walt took the photos. It was nice, for those who wanted to, to be able to combine a short work project with a cave trip into Billy Clay. 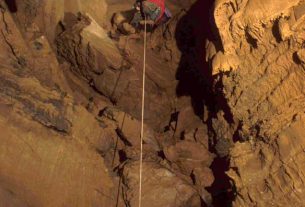