March 3 NSS Fellow and Life Member Barbara Schomer died November 2, 2011 after a year long battle with cancer. Barbara started caving in the early 1970s with Norm Snyder and the American Youth Hostel chapter in Pittsburgh, Pennsylvania. Norm led hard, bare bones, beginner trips and was surprised when Barbara kept coming back. Her desire for more adventurous trips led her to the Explorers Club of Pittsburgh and her first vertical trip, Cass Cave, West Virginia. About this time, she also joined the Pittsburgh Grotto and by 1981 was helping with the organization of the 1982 Costa Rica Expedition. Barbara was always one to pitch in and when the expedition’s operations person started sleeping late, Barbara took over organizing the day’s tasks so that everyone had an assignment. On the expedition she met her future husband, Bru Randall, and the two began caving together. Barbara edited the Pittsburgh Grotto’s NETHERWORLD NEWS for several years, but preferred caving to writing about it. She led beginner trips, helped organize, and teach, vertical classes, grotto open houses, and joint trips with the Explorers Club of Pittsburgh. She participated in several grotto survey projects, Askon Hollow in Pennsylvania and Twin Columns and Overholts Blowing, in West Virginia. Barbara also surveyed in the Central Kentucky Karst Coalition’s Roppel Cave and transitioned to the Cave Research Foundation survey of Mammoth Cave when Roppel was connected. Barbara’s American caving also included trips to TAG, the alpine karst of Wyoming, and the lava tubes of Hawaii.

In 1984, Barbara and Bru returned to Central America to deliver the final report of the 1982 Costa Rica expedition to the Costa Rican National Park Service and survey more caves there and in Honduras. In 1989 she helped out with the Earthwatch Maya Cave project in Belize.

In 1986, Barbara was selected to be an International Teaching Fellow and spent the year in Victoria, Australia. She and Bru quickly connected with the Victorian Speleological Association and were soon caving all over Australia. In fact the caving was so good that Barbara and Bru returned in the summer of 1987 driving three quarters of the way around Australia in sixty days caving all along the way and taking part in two caving expeditions. They returned again in 1994 for an expedition in the Northern Territory. In 2002 Bru had a teacher exchange to New South Wales, There they caved and surveyed with the Highlands Caving Group and Sydney Speleological Society.

Barbara loved to travel to places that didn’t get a lot of tourists. She and Bru trekked in the Andes, canoed 1,000 miles on the Yukon River and spent two years as Peace Corps Volunteers in Kenya. In Kenya, they managed to cave and survey with the Cave Exploration Group of East Africa and climb Mt. Kenya

As arthritis made cold wet caving more difficult, Barbara continued to take her grandchildren and nephews caving. She also became interested in the study of lichens; we’ve all seen them but perhaps not noticed them. Her interest eventually led her to volunteer work in Everglades National Park, Florida, during the winter of 2010, helping with the lichen inventory project there. In her honor, the project leaders, Jean and Rick Seavey, named one of the newly discovered lichens, Calopadia schomerae after her.

In late September of 2010, just after returning from a trip to Ireland, Barbara was diagnosed with stage 4 lung cancer. She went through all the recommended treatments of radiation and chemotherapy, all for the purpose of being able to tie up all the loose ends. It was Barbara’s Last Great Adventure. Through all of this she managed to attend a VAR, go on a caving trip, and attend the Old Timers Reunion in West Virginia where she got to see so many of her friends one last time. Now she has joined Floyd Collins, Lew Bicking, Bob Lutz, Dale Ibberson, and a host of other cavers. She is at peace but she is not alone. 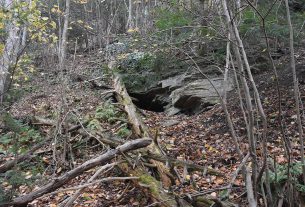 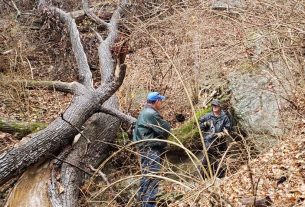