During this non-caving year, among other things, I have gotten caught up on the computer end of drawing up the Harlansburg Cave map. It’s not up to two miles yet, but is close. The most important discovery on the last few mapping trips was that we have actually mapped part of the under the road connection, definitely proving that the north side and the south side connect. Well, you may notice that the map does not actually show the passages connecting, but the survey crew of Mike Schirato, Caleb Hammond and I definitely knew when we were surveying under the road from the rumble and vibrations of the vehicles traveling above ground, not far above us.

And, while surveying on the north side, we discovered the famous “never make it out alive” room, not far from the connection. Tom Metzgar told a story a few years ago, one that other cavers, probably countless others, could attest to once they have done the connection from the south to the north. While I was off surveying in a known part of the cave, not far from the entrance, years ago, Tom and Lee Blazek wandered off. Gone an extremely long time, they eventually, he told it, popped out on the other side of the road. What took so long, in what is probably about a half hour trip for those who know the way, is that they kept taking different paths out of a room called ‘never make it out alive,” after the graffiti spray-painted there. Finally, Tom and Lee managed to turn a different way and ended up outside. He noted that they knew they were close to the road, because in certain areas they could hear cars, but they just couldn’t find their way. Anyone wanting to help survey once the cave reopens can contact me at kimmakc@aol.com 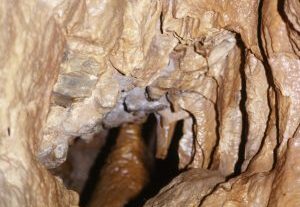 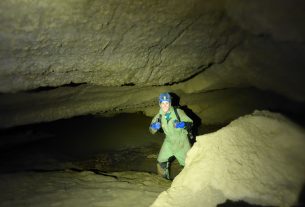 Penn Aqua Is Ours! 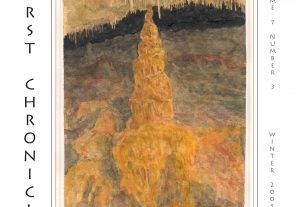