Following the February, 2009, board meeting of the Mid-Atlantic Karst Conservancy, Kerry Speelman, Mike Schirato, Mike Kern, and Tom and Kim Metzgar visited the Charles F. Lewis Natural Area. The natural area is located in the Conemaugh Gorge and borders Indiana and Cambria counties. It’s near the village of Cramer, and also not far from Johnstown.

A number of years ago, we conducted a cave surveying class for local cavers. The sandstone cliff area contains a number of large and small sandstone caves and rockshelters, and is also used as a climbing area by locals who are either not aware of or not afraid fo the thriving population of rattlesnakes and copperheads which also like the rocks.

Caver Alex Boughamer first turned us on to the area. At the time, members of the survey class surveyed several small caves. Unfortunately, as these things go, the follow through was never good and no maps were ever published. I had the survey data for one of the caves, but never drafted the map, so I was just as guilty as negligence when it came to following through.

Fortunately, Mike Kern also had data from one of the caves surveyed. Also, fortunately, we now have global positioning system units, to help us locate the cave entrances more precisely and to help avoid duplicating our efforts.

All five of us, plus Bart, looked at some Loyalhanna Limestone outcrop areas that Bob Eppley was trying to revive interest in; however, high water in a culvert that leads under Route 403 to more outcrop prevented us from taking a shortcut to look at it once more.

Kerry, Bart and I headed up the hill and discovered three caves I believe we did not previously catalogue. Mike Schirato had to leave, and Mike Kern and Tom went to an area of Wildcat Hollow to look at limestone outcrop that we had checked with Eppley years ago. Tom excitedly reported that a new segment of this area has been added to the state forest.

Mike and Mike revisted the area a few weeks later and mapped some of the features, and documented their locations. Some of Mike Kern’s pictures are published here. The identification of the entrances will await cave names, some of which might become life member cave maps. Mike Kern also graciously agreed to draft the maps. Those, too, we anxiously await. 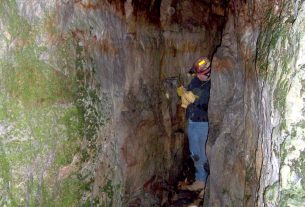 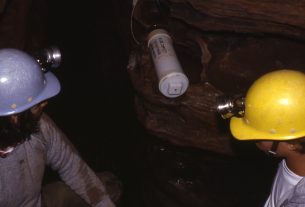