Skip to content
Home > Preserves > Cleversburg Sink Preserve > Cleversburg Sink Ladder Replacement
March 2The Cleversburg ladder replacement occurred today at Cleversburg Sink. I along with about 8 others from the Franklin County Grotto were there. The ladder was pre-cut for assembly by Howard of the FCG. We all carried pieces of the ladder into the cave including 4-10 foot sections of wood. The ladder was assebled inside the first room prior to the ladder drop. It took about 3 hours to assemble and then positioning it to the drop was a challenge. The ladder weighed maybe 200 lbs or so once assembled.
The lock has some dirt and I cleaned it pretty well. Please file the back side of your keys down as they will work/fit better into the lock. We also found that once your keys is in the lock and turned, if you sqeeze the shank, it open a lot easier and the same with closing.

The cave is slowly flooding. Burd Run has minimal flow and sinks right near the cave and filling it. The cave water level was up to the third rung (about 4 feet off water in the main hall) on the old ladder so the cave is pretty much inaccessible except the entrance areas. The water level only rose a few inches in 4 days.

I left the cave before the new ladder installation was complete. But it should be all done and the old ladder is supposed to be removed and auctioned off as a fund raiser.

The old ladder was over 25 years old and held up well. Better wood was used this time and should hold up for at least 25 years.

Many good stories were shared and I was told about a cave near Hagerstown, MD which I will have to research. There were only 2 pips in the entrance room hibernating. 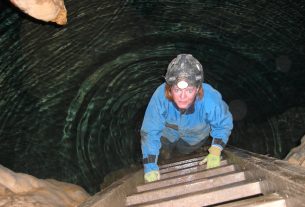 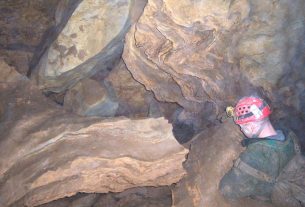