Skip to content
Home > News > Just A Batty Fools’ Day
Dark clouds loomed in the western Pennsylvania sky on April Fools’ Day 2006, as ten adults, clad in work clothes, boots, and gloves, prepared to face the day—a day we were to spend planting four by four posts, atop which were affixed flat, black boxes with which we hoped to attract bats to the town of Dawson in Fayette County. No, we were not disciples of Harry Potter’s Hagrid—the beloved keeper of creatures unusual, great and weird. We were members of the Mid-Atlantic Karst Conservancy, a western Pennsylvania based cave conservancy; the Allegheny Group of the Sierra Club and residents and members of the Dawson Borough Council.

Yes, it was unusual that members of the borough council were helping plant the bat boxes—ten in all—on a lot owned by the Dawson Volunteer Fire Department. But it was a good unusual.

In the late summer and early fall of 2005, local news coverage of the regularly scheduled Dawson Borough Council meetings reported that many of the town’s residents were experiencing problems with bats roosting in residences. Many of the residents were unappreciative of the nightly bat flights emanating from their homes. Councilman Jay Nelson began looking for ideas to deal with the issue. At the same time Sierra Club member Kris Gunnarson of Pittsburgh picked up on the news story and wanted to help.

Kim Metzgar, a caver and founding member of the Mid-Atlantic Karst Conservancy, who is also a member of the Sierra Club, saw Kris’ plea for help on a Sierra Club internet message board, and thought that possibly cavers and Sierra Club members could work on a possible solution for the townsfolk. Kim contacted caver Jim Kennedy, a former Fayette County resident who works for Bat Conservation International in Austin, Texas, and who is also a member of MAKC. In the “small world” category, it turns out Jim’s grandparents were from Dawson and he recalled spending many pleasant boyhood days in the town, which fronts the Youghiogheny River.
Jim, Kim and Kris began an email correspondence with Jay Nelson, who did quite a lot of studying up on bats himself. This eventually led to MAKC applying for a Sierra Club grant to help fund purchase of ten bat boxes for Dawson, in hopes of finding the town’s bats new homes which were not also occupied by humans.
During the winter, Jay Nelson worked, with some success, to educate the residents about screening off the entry and exit points for bats in their homes, so when the bats return to town for summer roosting, they’ll be “encouraged” to use the newly-erected bat houses. Jay also had two bat boxes built using local volunteer help, which led up to the April Fools’ Day bat box planting.

Kris Gunnarson and Phil Coleman of the Sierra Club, Kim Metzgar and Johnny Motto of MAKC, Jay Nelson, Claudia .., and two other local residents turned up for the big day. MAKC treasurer Sue Moore, a BCI member, had ordered the ten bat houses, which could house up to 200 bats each, from BCI over the winter. They were shipped directly to Jay Nelson, with mounting kits and instructions.

Jay then purchased posts, attached the houses to them, and solicited permission from the local volunteer fire company to plant the houses in a lot near the river. He even had three of the postholes dug by the time the work crew arrived.

We met at the Dawson trailhead parking lot for the Youghiogheny River Bike Trail, part of the Great Allegheny Passage which goes from Pittsburgh to Washington, D.C. The lot is right across the river from the town, and we drove over a bridge which is to be reconstructed in summer of 2006. As part of the reconstruction project, Jay and other local officials are hoping to encourage the bridge designers to make the bridge attractive to bats, in the hopes bats will also roost underneath the bridge.
We helped Jay load the posts and concrete mix into his pickup, then headed for the “construction site.” Jay and Roy, another local resident, had all of the tools we needed to plant the posts, including a nifty battery-operated tape measure to help us determine if we had dug deep enough. We all took turns working at the postholes and in about two hours time had the ten postholes dug. We put nine bat houses six feet apart from each other on one side of the lot, and a lone house about twenty yards away. Phil and Kris made sure the houses were all facing where they would receive the most morning sunlight, Roy, Claudia and Johnny began mixing the mortar, and Jay, Phil, Kris and I made sure the poles were in place before the concrete was poured.

By noon we were finished, then Jay took us up on the hill above town for a bat house relocation project. He had received permission from a friend of his to plant the two bat houses Jay had made in his friend’s yard. The friend had consulted with a neighbor to make sure he was okay with it. Turns out the husband gave permission without consulting the wife, and the wife had a fear of bats. So, to keep peace in the neighborhood, we were to dig out and relocate these two bat houses to a more bat friendly section of town, not far from Jay’s house. We were becoming quite good at bat house planting, and the relocation of the two did not take long at all. By one we were done and headed into nearby Connellsville for lunch, courtesy of Jay Nelson.

We are all making plans, at some point, to revisit Dawson in summer to see if the houses are being used. Current theory is that the young ones soon to be born may be among the first to take up residence in the houses. We hope the town continues to sustain a healthy, happy bat population, and, with Jay’s continuing educational efforts, that most residents will appreciate our furry friends. “Who knows?” Jay says. “We might even attract some tourists coming to see our bat flight.”
Kris Gunnarson had t-shirts designed, which are for sale and will benefit the ongoing bat conservation projects of MAKC, which has a designated bat protection restricted fund. The design incorporates the town’s locale along the river, with a railroad running through it, and the rail-trail on the opposite side of the Yough from town. 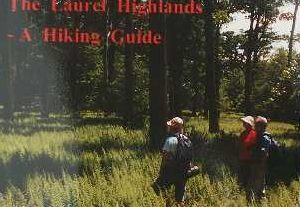 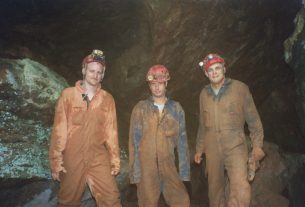 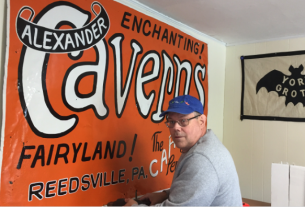