A summary of features from our newsletter, The Karst Chronicle.

Who are we and what are we about? As we have started out, we are a non-profit conservancy incorporated under the Pennsylvania Nonprofit Corporation Law of 1988 (as amended) exclusively for the purpose of acquiring and managing caves and karst areas for scientific study, education of those persons interested in speleology, recreational caving and conservation and protection of cave and karst resources.
MAKC formed in November of 1997 with eleven board members pitching it $10 dues each. Shortly after our formation, Laurel Caverns owner Dave Cale helped us with more than $500 donated from the cave’s wishing well. This funding was used to help finance our incorporation costs. By February of 1998 we had twenty-one members, including our first donor member, Pittsburgh Grotto, which contributed $150.
The initial board members were: Kim Metzgar, Chairman; Mark Lancaster, Vice Chairman; Andrea Dieffenbaugher, Secretary; Paul Damon, Jr., Treasurer; Doug Dean, Garrett Czmor, Walt Hamm, Mark Hanneman, Tom Metzgar, John Nestor and Mike Patun.

Less than a year after our formation, the Fall newsletter announced MAKC’s acquisition of Hall Cave, Huntingdon County, Pa., from Bill and Martha Anderson. The Andersons sold the conservancy the cave and 9.45 acres of ground because they wanted it preserved for future generations. By the September 26, 1998, closing date, we had raised over $3,000 for the purchase. Members of our board of directors loaned money for the rest of the purchase, which was later repaid.
MAKC members also testified before the Pennsylvania Environmental Quality Board on the proposal to elevate Trout Run in Derry Township, Westmoreland County, to an exceptional value stream. Trout Run is a pristine stream fed by primarily underground drainage in Chestnut Ridge. The run is also the source for Blairsville Water Authority’s reservoir. The Trout Run testimony was part of the protest against the Tasman Resources Quarry started by Loyalhanna Grotto in the late 1980s.
MAKC also provided written testimony to the Mifflin County Planning Commission in regards to a proposed industrial hog farm in Wayne Township, which was to have been built in a karst area. Our testimony, while not advocating for or against the farm, provided evidence of damage to watersheds which has occurred in other areas when karst areas are disrupted.
The MAKC booth made its debut at the Old-Timers Reunion in Dailey, West Virginia, for the first time.

This newsletter featured adoption of our management plan for Hall Cave. MAKC’s acquisition of the cave was featured in the November 30, 1998 edition of the Pittsburgh Post Gazette, in a story written by Ken Chiacchia. “Small conservancy buys cave to prove its stewardship ability,” was the headline. The Hall Cave fund raising stood at 50 percent paid off.
Two board members, Mike Patun and Mark Hanneman, moved out of state. Bart Ritts was appointed to fill one of the vacancies.

MAKC published an assessment worksheet as an attachment to this issue of the newsletter to encourage members to recognize and assess caves for significance, with an eye toward acquisition.
The first MAKC open house was planned, at the Hall Cave Preserve.
We provided comments for the Pennsylvania Bureau of Forestry’s State Forest Management plan, in development for the years 2000 to 2014.
We also noted that the SMT Family Partnership Land containing many of the caves in the Hillside area was up for sale.

In 1999 MAKC held a Bear Cave cleanup in April, assisted Loyalhanna Grotto with an Adopt-A-Highway roadside cleanup, constructed a kiosk at the Hall Cave Preserve and held a work weekend to mark and clear property lines at the preserve.
MAKC started its first cash raffle. Membership rose to 110 and more than half of those, or around 60 members, stopped at Hall Cave for our open house. They were from Virginia, Maryland, Ohio, New York, Pennsylvania and West Virginia.
We also reported that the Pennsylvania Bureau of Forestry, Forbes District, resolved a parking area access issue with a local landowner near Barton Cave, Fayette County.

The Karst Chronicle cover featured an article on Cavers Who Own Caves, written by member Karen Bange, who, along with her husband George, owns Rupert Cave in Mifflin County. Karen tells the story of how they came to become cavers and eventually acquire their cave. The article was aimed an inspiring others to do as they have done.
In the summer of 1999 MAKC started to remove graffiti from Barton Cave, continued with Bear Cave graffiti and trash removal and, with the help of John Long, Jack Reed, and the Metzgars, erected an educational kiosk at the Bear Cave parking lot.
We also noted the formation of Bubble Cave, LLC, a neighbor cave conservancy set up as a limited liability corporation to purchase Bubble Cave in West Virginia. Two of our members, Gordon Birkhimer and John Pearson, were among the founding members of the organization.
This newsletter also featured some caves which are no longer here. The story of Rose Point and Portersville caves in northwestern Pennsylvania are told. They were both destroyed by quarrying.
MAKC members, including J.R. Reich Jr., the Metzgars, Roy and Terry Garland, Dale Ibberson, Robert Miller, Walt Hamm, Tom Kennedy, Jim Kennedy and others, also completed a four-year project to remap Laurel Caverns in Fayette County. MAKC became the first organization in Pennsylvania to publish a map as a four-color poster sized map, with our proceeds going toward cave conservation.
The conservancy was featured on WPSU radio, which produced a CD-ROM of the segment with Tom Metzgar at Hall Cave.
Nancy Finney was named to our board of directors, and members Bob and Bev Danielson gave us a van, the condition being that we give it away. So the famous MAKC van raffle occurred, with four organizations, MAKC, Pittsburgh, Loyalhanna and Cleveland Grottos selling tickets and benefiting from the donation.

The MAKC’s second acquisition was announced. Two caves, the mile-plus Billy Clay Pit and the small pit near it, Clay Pit #2, were acquired on a 2.7 acre parcel for $20,000 plus some additional expenses. The caves were in the middle of a development near Snowshoe Ski Resort, and board member Walt Hamm worked with the owner to set up the cave preserve in the center of the development. A permit system was developed for access.
Dean Snyder writes about Ohnmacht Cave in Berks County, Pa., which was destroyed during a dam building project in the 1970s.
Maps of Clay Pit No. 2 (MAKC owned) and Clay Pit #3 (privately owned) are published in this issue as well as details of the Billy clay Pit fund raising campaign.
Spray paint vandalism occurred at Bear Cave on January 9, 1999, and on the 15th MAKC was there, cleaning it up.
Contemporary Cave Use Study data was examined for Bear Cave, Hall Cave, and Barton Cave.

MAKC announced a project to stabilize the entrance of Hindman Cave in Armstrong County. The project, planned and executed by members of Loyalhanna Grotto, received financial and fund raising support from MAKC. By spring MAKC had raised twenty-five percent of the purchase price for Billy Clay Pit.
The bat population in our Hall Cave grew to 147, and Tannery Hole and Tannery Hollow Roadside Cave were featured in the “Caves Which Aren’t Here Anymore” series.
Photos and an article on yet another Bear Cave graffiti removal project were published. MAKC participated in its first Earth Day Fair, this one sponsored by Sierra Club and held at Frick Park.

The 2000 convention of the National Speleological Society was held in Dailey, West Virginia, and MAKC members were there in full force, with our booth and fund raising activities for Billy Clay Pit. More than $10,000 was raised for the purchase of Billy Clay Pit. John Pearson joined our board of directors.
Garrett Czmor reported on vandalism at Tytoona Cave.
A sample of the J.R. Reich, Jr., map of Laurel Caverns was published, and the MAKC started its sustaining membership program.

The first full size photo appeared on the cover of the Karst Chronicle, a photo collage in color of pictures taken by Alex Boughamer and Walt Hamm in Billy Clay Pit. The photos accompanied Walt Hamm’s feature article on the mapping of Billy Clay Pit. Photos and an article on the Billy Clay work weekend were also published. Walt’s fold-out map of Billy Clay Pit was inserted in the issue.
Jason Gray published maps of Gray Fox Fissure and Macville Bypass caves, Armstrong County. Kim Metzgar published maps of some shale chambers in Young Township, Indiana County.
Joining the MAKC board were Ethan Frantz, Paula Grgich and Kerry Speelman.

MAKC finally paid off the Hall Cave Preserve, began participating in the cave register program in Western Pennsylvania, and began preparing educational materials in conjunction with the IMAX movie release of Journey Into Amazing Caves.
Fred Grady issued a report on the paleontology of Billy Clay Pit, and Andrea Dieffenbaugher planned the cleanup of Machan’s Rock Cave in Tuscarawas County, Ohio. She helped Kim Metzgar map the cave to 298 feet, the map published in this issue.
An update was given on the State Forest Resource Management Plan and the Balanced Rock Shelters in Indiana County were mapped.

MAKC’s annual open house was held in McVeytown, courtesy of George and Karen Bange, who allowed us to camp and cave on their Rupert Cave Preserve.
Bill Snope of York Grotto donated a pressure washer to us to help with cave cleanups. Cortney Mayle (Frantz) devised, created, edited and published a Caver’s Cookbook, proceeds to benefit MAKC.
The final hall cave sponsorship map was published. CCUS cave register data was published for Casparis Cave, Coon Cave and Lemon Hole. A map and description of Walkers Mill Cave, Allegheny County, was published.

Kerry Speelman edited and compiled a special program June 8-10, 2001, featuring caves from Blair, Centre, Huntingdon and Mifflin Counties, to be used for our open house program. There were 54 pages of maps and descriptions, including a never before published profile map of Rupert Cave by George Bange.

Tom and Kim Metzgar announced their acquisition of Bear Cave, Westmoreland County, from the estate of Kim’s grandfather, Albert Smith, a more than ten-year process. The Western Pennsylvania Conservancy also acquired 400 acres of adjacent lands, intended to be turned over and incorporated into a new section of Forbes State Forest. A map showing public and private lands in the area was published, based on tax maps from the area.
The discovery of Grove Run Waterfall Cave was announced. It’s in Linn Run State Park. MAKC also explored Mount Rock Cave in Mifflin County, Pa., and an update was given on the Hindman Cave project. Nearly two-thirds of the fund to pay off Billy Clay Pit have been raised.
Walt Hamm’s never before published map of Askon Hollow Cave, Fayette County, was included in this issue, as was his surface features map of the Billy Clay Pit area.
The life membership category was created.

A collage of the Machan’s Rock cleanup in Ohio is shown on the color cover. Photos and feature articles track the progress of the cleanup and the cooperation of the local fire department and sandblasting company with cavers. News coverage of the cleanup is also shown.
Kerry Speelman did an update of a Somerset County cave documentation project he’s working on, with maps of Crystal Cave, and 30 other caves listed. He updates the status of many of the county’s caves, and writes about the origins of the cave survey for the county. Richard Roth wrote an article about caves in Tibet and China.

Kim Metzgar’s pen and ink sketch of a caver exiting Strangford Cave is on the cover. Walt Hamm begins his series on caves of the Swago area of West Virginia, with maps of Pretty Stinky Pit, McKeever’s #1 pit, McKeever’s Chimney Pit and Hause Cave. Changes in the Lemon Hole parking area are explained.
MAKC sponsored an orientation to cave rescue class at Laurel Caverns. 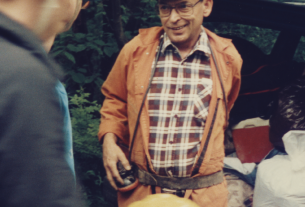 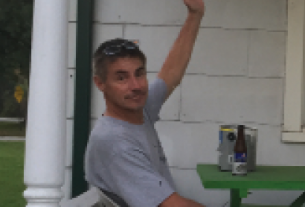 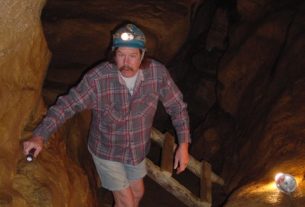